Dialling Restrictions allow granular control over numbers that are allowed to be dialled from the platform. Dialling restrictions are set in the extension manager per extension.

Block lists are lists of numbers that have been determined to be restricted and cannot be contacted.

Multiple block lists can exist, including the default block lists. These lists can include varying levels of restrictions and be applied separately to different extensions, thus allowing very granular control.

The system allows blocking a specific number or blocking entire number blocks by using wildcards; for example, adding * will indicate any number or amount of digits. With wildcards, either block restrictions can be applied, such as “all” with 0*, or specific prefixes can also be blocked, such as 02* or 06*.

When creating a block list, it is recommended to not use the tenant name as the name of a block list.

Adding numbers to a group can be done via a CSV import. Note: When creating the CSV file using Excel, be wary of leading 0’s being stripped from numbers. The CSV file needs only to include the numbers and no other details.

Country lists allow for international dialling restrictions. Like block lists, it is possible to create specific lists or utilise the default ones. To allow destinations, simply make sure the particular prefix is enabled within the relevant country list. The TMS automatically updates when a country code is enabled/disabled. 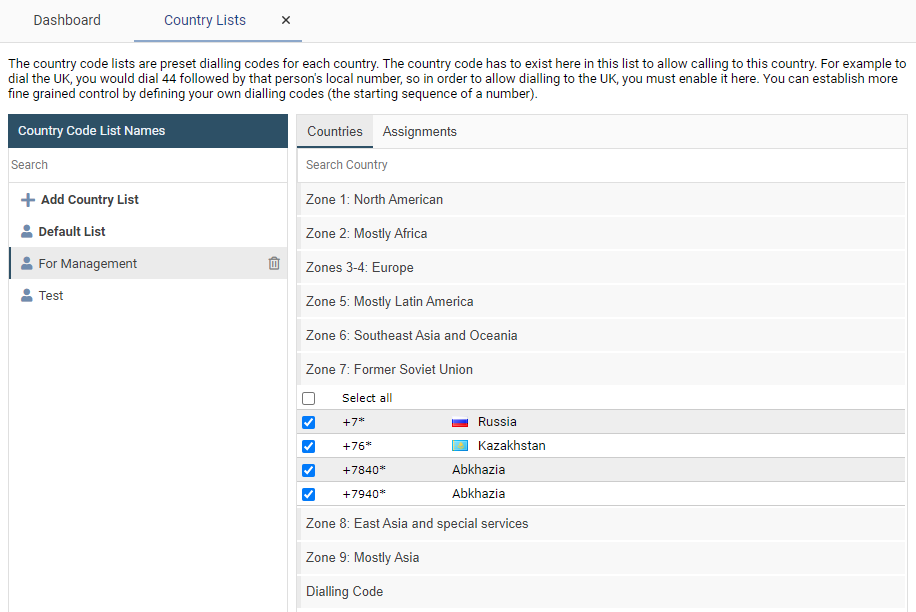 Staff can be assigned to country lists by dragging and dropping the available member to the “Assigned” members column from the Assignments tab.

Note: When enabling the first country code on the first list (Canada), the entire Zone will be enabled as the country code starts with +1 and therefore, the rest will automatically be enabled.

Country Codes can be added in bulk by importing a CSV format; all prefixes to be enabled must be listed in the first column.

Note: Ensure that countries with a high risk of Toll fraud are disabled unless explicitly required.

The allow lists allow specific numbers to be dialled and precedence over any other restrictions. Otherwise, allow lists operate and appear much like block lists.