The purpose of the campaign manager tool is to enable the administrator to create a campaign. It is possible to create several campaigns, each with different agents assigned, if desired.

From the  Campaign Manager tool, the administrator can create new campaigns by pressing the “Add Campaign” button on the top right of the page.

There are different campaign types available to cater for varying business cases, these are beyond the scope of this manual, and will be covered under specialist topics. Each campaign type has its own attributes, and parameters.

Preview Dialer selects a contact for an available agent and then works through each number available within the contact until there are no more numbers to try, or a result has been reached. This approach means no leads are wasted, and every number is attempted that should be. When the contact has been chosen, the information pertaining to that contact is displayed to the agent, allowing them to familiarise themselves while a countdown begins. When the countdown runs out, the system will dial automatically on behalf of the agent.

Power Dial campaigns are more suited to scenarios of vast numbers of contacts, generally which came at little or no cost, so wasting leads is less of a consideration than agent idle time. When an agent is flagged as idle, the system selects multiple contacts, and then dials a single number from each of those contacts. The first person to answer is then passed to the agent. The rest of the contacts who answer may be configured to overflow to a set of actions such as a message or a queue of available agents. 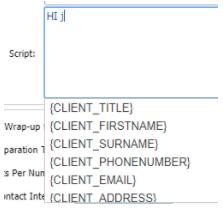 To add a campaign an administrator will complete the name, description and optionally, a script. The campaign type will need to be chosen, and the available parameters will change according to type.n the script is created, placeholders can be used. These placeholders will automatically be replaced by the relevant data that is uploaded with the list of contacts.

The Wrap-up time parameter specifies how long an agent will have to disposition a call after hangup, i.e. provide an outcome for the call that has just happened.

Preparation time is the amount of time, in seconds, that an agent will have to familiarise themselves with the information of the next contact. This will count down and upon reaching zero, will dial. This countdown can be skipped by pressing the Dial button.

Max attempts dictates how many times a particular number must be tried, and is unsuccessful in establishing contact, before it is considered unreachable, and therefore defunct.

The number that the calls to contacts in this campaign are made from. This can be withheld, i.e. Anonymous, a static number or set to a Randomise pool. If using a Randomise pool, please note the pool will need to be created in advance. Also note that campaign CLI will override the individual CLI set on an extension. 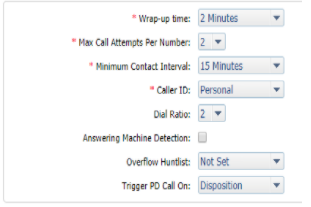 The Wrap-up time parameter specifies how long an agent will have to disposition a call after hangup, i.e. provide an outcome for the call that has just happened.

The amount of times a number will be tried before moving on to the next number.

The number of contacts that are selected to dial for an agent at any given time.

This button can be enabled to assist the agent’s to detect voicemail through AI. (Artificial Intelligence) This coll could  automatically be given a disposition.

When agents are all on calls and there is an overflow of incoming calls, these will be redirected to this particular list.

This indicates when to send the next call to the agent. This can be done on hanging up of the previous call or after the disposition submission.

Custom fields allow for non-standard information to be added to the script, and will appear on the agent’s screen when the contact is being dialled (or, in the case of Power-Dialer, on the phone).

The custom field parameters in campaign setup, allow for the administrator to provide labels for this information, so the agent will have clarity on the contact information provided. 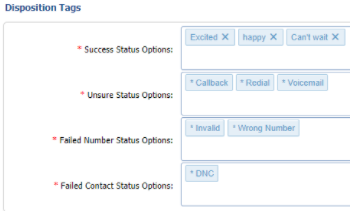 Dispositions are used to provide outcomes for each call, this is particularly useful in reporting progress and results of a campaign.

Campaign setup allows for different dispositions to be created for each campaign, and reported accordingly. There are some default tags in each category, and these are flagged with an asterisk (*) to identify them.

Dispositions are divided into categories, which will dictate how the system will act regarding that outcome. The categories are generally divided into Success, Unsure and Failure.

Success being that the desired outcome has been reached, and this contact should not be called again. Successful contacts are thus considered “completed”. Failure is subdivided further into two sub-categories, being Number Failure and Contact Failure; the first being that this particular number belonging to the contact has failed, and should not be tried again, but should the contact have other numbers, it will continue with those. Contact Failure is that the entire contact has become unviable and should not be called again, these contacts are also considered completed.

Unsure, means that there is no finite outcome, and this contact is still viable to be called again. The Max retries parameter interacts with this category as when the Max retry value is reached, the outcome is changed to a Failure state of “Unreachable”. This would be either a Number Failure or, should there be no further numbers to try, a Contact Failure.

There are certain system-generated and other mandatory dispositions in the platform, these are listed in the table below with their categorisations and a description of the disposition.

Allows the agent to modify or add to a contact details, particularly useful in adding alternative numbers to a contact.

Enables agents to add contacts to the current list.

Allows an agent to make notes either in the Agent Workspace whilst on the call or in the disposition window at the end of the call. These notes are stored with the call dispositions.

This is also available in-call or in the disposition window, and allows an agent to capture a reference number and associate it with the call. These tags are also useful in searching for calls in Call Detail Records or Recordings pages.

Will enable an agent to receive an inbound call during the preparation countdown, the countdown will then resume when that call is complete. If this is not enabled, calls will be automatically rejected.

Sticky agents allow contacts to be assigned to particular agents, and not available to others.

It is possible to create targets for a campaign, namely Total Calls, Completed Contacts, Successful Calls or Financial Target, and to choose whether achieving the desired target will automatically deactivate the campaign. Note that targets are also available at a list level.

The Campaign Manager page allows for an overview of parameters, with buttons to Edit or Delete the campaign, and options to link to the statistics, add webhooks, assign agents and manage lists.

Webhooks are a mechanism to allow the platform to interact with other systems. These can be added to campaigns to allow feedback or start of a workflow in a secondary system to the TMS such as a CRM platform. Webhooks must already exist in order to be selected within campaigns, these are created in the Integration Centre.

The action of the webhook can be seen in the Agent Workspace, and will be covered in the corresponding chapter.

When a webhook is added, 3 settings are available: 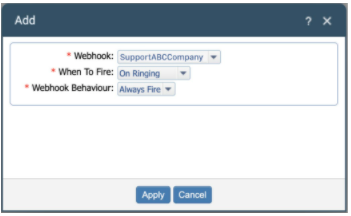 just to do it.

Here an administrator will find all information including how many calls were completed, how many failed and why.  These stats are linked to the administrators Campaign Analytics tab and will be discussed further in the Analytics chapter.

Assigning an agent to a campaign means that when they are logged in, the campaign is active and there are available contacts in an active list, the agent will receive calls from that campaign. Agents assigned at a campaign level will be default agents on all lists of this campaign. Note that extensions will not be available for selection if they have not been enabled as an agent.

In order for an extension to be activated as an agent, the administrator needs to enable the agent on the Agent tab, in the extension manager menu as well as assigning the agent to an outbound queue.

To assign the agents to a campaign, click on the “Manage” button of the desired campaign in the Campaign 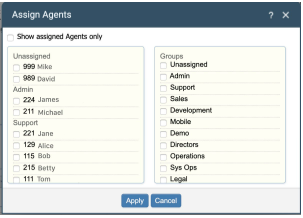 Manager page. This will open a new “Manage Campaign” page with the agents and contact lists as well as Stats, Webhooks, Edit and Delete buttons. Select the “Edit” button within the Agents section.

A pop-up window will appear, with 2 panes. Agents on the left hand side, arranged according to groups, and groups in the right hand pane. Should a group be selected, all members of that group will be included. Note: Multi campaign membership is possible with Preview Dial but not Power Dial campaigns. Should an agent be part of a Power-Dial campaign, and are assigned to another campaign, they will be unassigned from the Power-Dial campaign.

Once a campaign is set up and agents assigned, a contact list should be uploaded to complete the necessary to start a campaign. 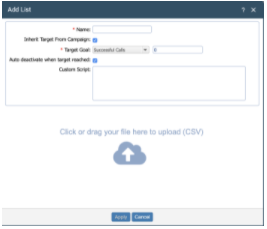 Lists available for a campaign are visible on the bottom of the Manage Campaign page. To add a list, click on the “Add List” button, a pop-up window will appear.

Lists may have their own properties, which will take precedence over those in the campaign.

Upload a CSV spreadsheet by selecting the upload area to browse your local machine or drag a file onto the window. Once the list is imported, the categories need to be checked to ensure that all information matches the configured field setting, i.e. first name is in the First Name field. Note that a contact in a list can only be deleted if they have not been dialled before.

Within each campaign list, an administrator will be able to view the most recent campaign history and the details of each call.  All the contacts dial statuses with a time, number of attempts and the agent that last called them. More details of the disposition are available in a tooltip when clicking on a contact name, whilst further contact history details can be found by selecting the “Detail” button.

Note: The number shown next to the contact name is the last contacted number. 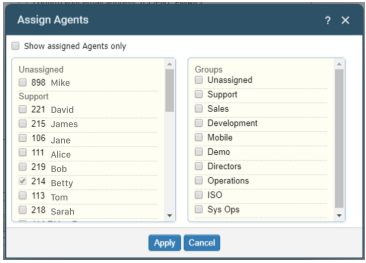 Lists can be moved in order of priority by dragging the list up or down. The list at the top will be contacted first.

The Campaign main page presents an overview of all campaigns, their activity and their progress.

The list of campaigns is in order of priority from top to bottom. The campaigns can be rearranged, by dragging or using arrows. When an agent is allocated to more than one campaign, they will receive leads from the higher priority campaign first until that campaign is completed or until the leads in that campaign are exhausted.

The status of a campaign is indicated by either a Red Circle (Not in action), Green Circle (Campaign in use) or Blue Tick (Campaign completed). Selecting the progress bar will show a tooltip with the progress percentage as well as the outstanding target.